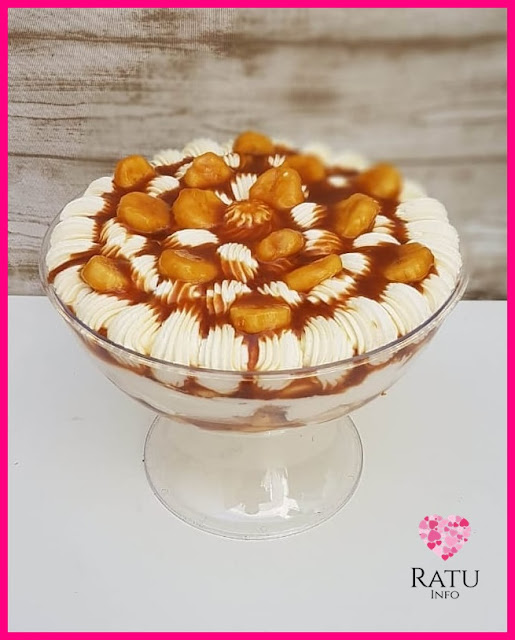 How to make chocolate banana pudding :

1. Banana Pudding: Peel a banana, slice transversely 1 cm, set aside. Mix milk, sugar, and gelatin in a pan, stirring until the agar dissolves. Cook over medium heat while stirring until it boils and the sugar dissolves. Add bananas, stir well, remove from heat. Add banana essence, stir well.
Moisten the baking pan volume ± 2,000 ml with boiled water, pour the gelatin mixture into the pan. Set aside until slightly hardened.
2. Chocolate pudding: Mix milk, sugar, and dissolved gelatin. Toss it on medium heat, add melted chocolate, stir constantly until it boils, remove from heat. Stir until the steam is reduced, add raisins, stir well.
Pour slowly the chocolate pudding over the banana pudding, set aside until it hardens. Remove from the mold, cut into pieces, serve with the sauce.
3. Sauce: Heat the sugar in a flat pan based on thick until it melts and becomes caramel. Add the butter, stir until the butter melts, add thick cream and milk, stir well. Add cornstarch, stir quickly until it boils and thickens, remove from heat.

How to make vanilla banana pudding :

1. Pour milk into a pan.
2. Mix sugar with cornstarch in a bowl. Then put in milk.
3. Heat the mixture over low heat, allow it to heat, but not to boil.
4. In a separate bowl, beat the eggs with a fork.
5. Pour about half a cup of the heated milk mixture into the egg, and shake it.
6. Put the dough number 5 into the remaining milk mixture, then heat it again until it boils. Stir until thick and bubbly. Then lift it up.
7. Heat butter until melted, mix with vanilla extract. Mix with pudding mixture (milk mixture).
8. Prepare a serving container. Add vanilla wafers, banana slices, and pudding mixture. Repeat again until it becomes several layers.
9. Refrigerate at least 3 hours before serving.